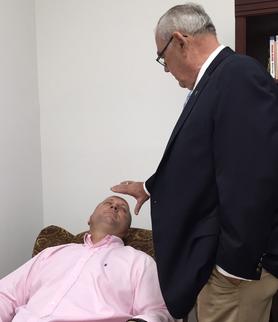 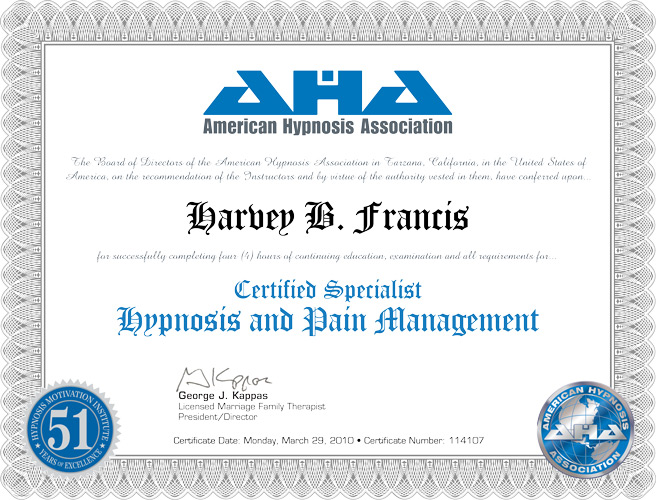 Questions and Answers about Hypnosis

Hypnosis is created by an overload of message units, disorganizing the critical mind, triggering our fight-flight mechanism and resulting in a hyper-suggestible state, providing access to the subconscious mind.

Most people plod along day after day, realizing just a small percentage of their potential.  They hope luck or some other mysterious, divine power can change their lives.  They soon reach that age of disillusionment and look around themselves.  Life seems to have passed them by and they wonder why and how they missed the boat.

What they don’t realize is that the divine power to change, is there, inside them, waiting to be their obedient servant, capable of giving them everything they wish for.  A far-fetched idea?  No.  Not far fetched.  It is a scientifically proven fact.  The secret starts with self-awareness and is completed by hetero-suggestions and autosuggestions.

Hetero-suggestion and Self Hypnosis are self-awareness expansion techniques, that are used to overcome the programming of your past.  It moves you toward the natural process of being successful, being prosperous, having abundant health and much happiness.

QUESTIONS AND ANSWERS ABOUT HYPNOSIS:

2.  WHY DO SOME PEOPLE HAVE DOUBTS ABOUT HYPNOSIS?
Hypnosis is such a misunderstood phenomenon.  For centuries it has been affiliated with spiritualism, witchcraft and various other “unexplainable” events.  Based on “B” movies, cheap novels and exaggerated claims made by undisciplined persons.

3.  IS HYPNOSIS DANGEROUS?
There has never been a documented case of harm coming to anyone from the therapeutic use of hypnotism.  The harm is that hypnosis is not used often enough.

4.  WHAT DOES IT FEEL LIKE TO BE HYPNOTIZED?  CAN I BE HYPNOTIZED?
The answer to this is extremely important because it may determine whether or not you can benefit from hypnosis.  Some people give up hypnosis after a few sessions because they were disappointed in their reactions, believing they are not suitable subjects.  Many people believe they will go through something different, new and spectacular in the hypnotic state.  They equate hypnosis with being anesthetized or being asleep or unconscious.  Hypnosis is a very pleasant feeling of complete physical and mental relaxation.  It is similar to that moment between knowing you are awake and going into the sleep state.  Because, while in hypnosis, you find your mind active, you hear every sound in the room, that you can resist the suggestions if you wish to, your attention keeps wandering, thoughts racing hear and there, realizing you are not asleep and remember everything perfectly.  The fact that you have not fallen asleep allows you to believe you have failed to enter the hypnotic state.

5.  DOES HYPNOSIS WEAKEN THE WILL?
Self Hypnosis strengthens it.  Hypnosis works with the will, not against it.

6.  CAN A PERSON BE HYPNOTIZED AGAINST THEIR WILL?
No one is hypnotized against their will.  Entering hypnosis is a consent state.  The hypnotist assists and guides the subjects, who then hypnotize themselves.

7.  DO PEOPLE HAVE TROUBLE COMING OUT OF HYPNOSIS?
A person may choose to stay in hypnosis after an experienced hypnotist asks them to come out of it.  The reason being, it is such a relaxed feeling of enjoyment, they prefer to stay hypnotized awhile longer.  If the hypnotherapist were to leave or in an extreme situation, die, the person would merely drift into a natural sleep to awaken at a more personally convenient time.  In self-hypnosis, you have complete and utter control, and set your own limits.  There has never been a documented case of someone unable to come out of hypnosis.

8.  WHAT IS THE SUBCONSCIOUS MIND?
The conscious mind, the mind you are conscious of, is your ”ME”.  It is the critical part of your mind.  The sub-conscious mind is the one that directs your conduct through the habits and emotional desires acquired from the influences of your environment, before you were old enough to reject harmful ideas and concepts.

9.  WHO CAN BE HYPNOTIZED?
Anyone with an open mind, reasonable intelligence and is able to concentrate.

10.  WHAT IF I CAN’T BE HYPNOTIZED?
Most people feel or think this very same way.  The fear is giving up control.  The opposite is true.  You are exercising a more powerful form of thought control than at other times by accepting the suggestions given.  The only thought to prevent you from going into hypnosis is the thought “I cannot be hypnotized”.